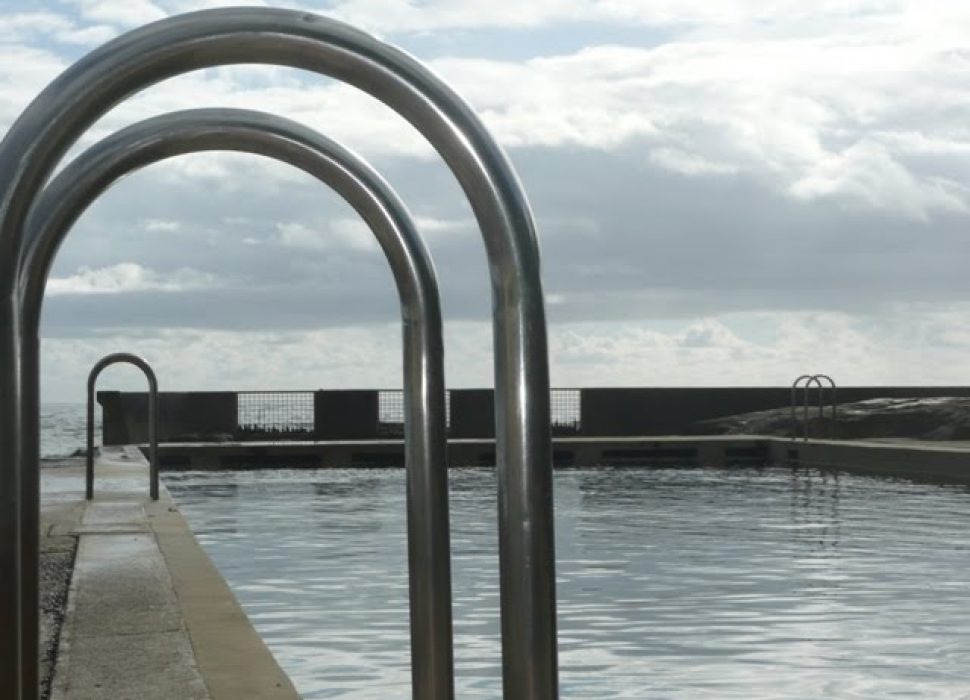 On a road trip to Brisbane this month we stopped overnight at Yamba on the NSW north coast. As well as having a lovely dinner at Pippi’s restaurant, the stopover provided a great opportunity for this pool-obsessed person to investigate the Yamba Sea Pool.

After a long drive from Sydney I was really looking forward to a swim. But as we got closer to the pool we were confronted by several signs saying: “Main Beach Pool Closed. Danger, Keep Away”. “Oh well, I’ll have a swim in the surf,” I consoled myself. But as I was walking away I bumped into a local heading towards the pool. “Not having a swim,” he said to me. “It’s closed,” I replied. “Don’t worry about the signs, it’s okay to swim,” he reassured me. “If we get booked, we can share the fine,” he added with a chuckle.

So after quite a chat with my fellow swimmer who I now knew as Paul, the soy bean farmer, I tentatively entered the 33-metre pool, not really sure if I should be in the pool. Built in 1969, the pool is starting to look a bit rundown. However when I suggested to Paul that it could do with some refurbishment he rejected the idea. “It has character the way it is,” he said. And maybe he is right.

There’s definitely something special about ocean pools. NSW has about 100 of them with a large proportion in Sydney, Wollongong and Newcastle. Some of these pools are natural pools on rock platforms. Others like Yamba Pool have been formed when the rock platform has been deepened and concrete walls and floors have been added. Others are concrete pools located on rock platforms. It’s a unique experience being in an ocean pool with waves tumbling in as you swim along. When the seas are big it’s always great fun hanging on to the wall or the chain dividing the surf from the pool, and waiting for the force of the waves to crash over you or push you back into the pool.

The next morning when I returned to the Yamba Sea Pool for another swim, I got to the bottom of the mystery of the ‘Pool Closed’ signs. A man cleaning up around the beach told me that the pool hadn’t been filling up properly but was okay now. The council just hadn’t got around to taking the signs down.

If you’d like to know more about NSW’s sea pools go to: www.nswoceanbaths.info/