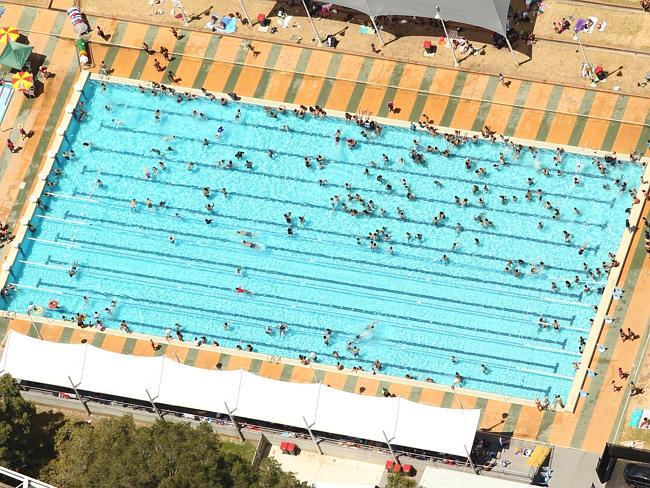 When I read Felicity Castagna’s book, The Incredible Here and Now, about two years ago I was inspired to visit Parramatta War Memorial Swimming Pool. In her young adult novel, she created vivid scenes of local boys, Michael and Shadi at the pool on those ‘too-hot Saturday mornings towards the end of summer’; finding a bikini top floating on the surface of the water; and swimming there at night when the place is all quiet – ‘like arriving in another universe’.

Well, two years have passed and I haven’t made it to Parramatta Pool. Like lots of things in life it’s not till the deadline is close am I forced to act. I thought I had all the time in the world but on 31 March Parramatta War Memorial Swimming Pool will close forever and will be demolished to make way for a new stadium for the local rugby league and soccer teams.

Over the past 12 months, a band of locals has been campaigning to try and keep it open – including ‘Putting out their cossies’ in support of the pool, organising petitions and holding rallies and meetings. The North Parramatta Residents Action Group (NPRAG) also worked with the firm of architects that designed the pool nearly 60 years ago, to develop an alternative plan that would allow a new stadium and the current pool to co-exist – but still the authorities haven’t budged on the decision to close and demolish the pool.

While council representatives say they have plans to build a new aquatic centre on a ‘to-be-announced’ site, it will be sad to see the end of the late 1950s-style complex, opened on the wave of pool building after Australia’s success in the 1956 Melbourne Olympics.

On the Parramatta Heritage Centre site there’s a video (with no sound) from the official opening on 24 October 1959, which was witnessed by five thousand people and featured a swimming costume fashion parade.  I also found a video on YouTube called the ‘Parra Pool Bombing Session Jan 2012” which is a crazy celebration of the life of the pool.

Until next week, when I make the journey to Parramatta Pool for my first and last swim, and follow Michael and Shadi in The Incredible Here and Now and ‘walk over to the shallow end and slowly slip myself in’.