A pair of Williams, a man called Max and Parsley the hermit down Vaucluse way
3 comments
Share:FacebookTwitter 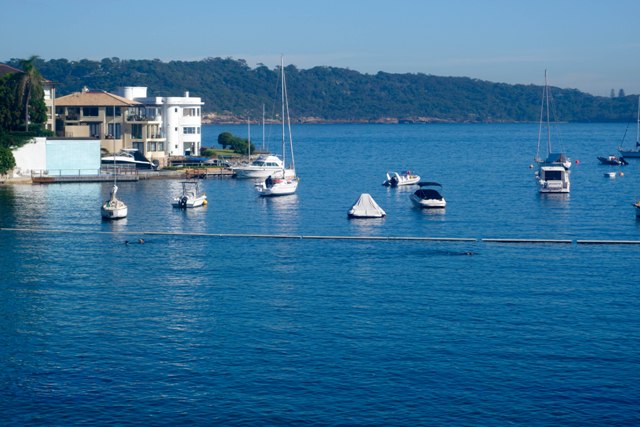 A pair of Williams, a man called Max and Parsley the hermit down Vaucluse way

There’s no swimmers around when I arrive at Parsley Bay, just trim women jogging with their mobiles and doing boxing in the park. 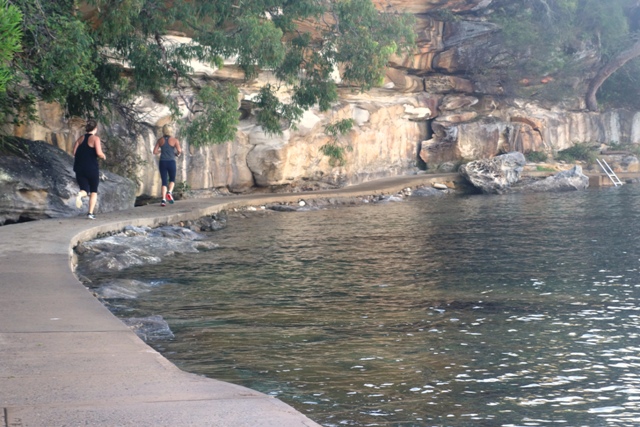 But when I walk around the path that leads to the deep end of the bay,  I spot a man in blue trunks, or rather he spots me. 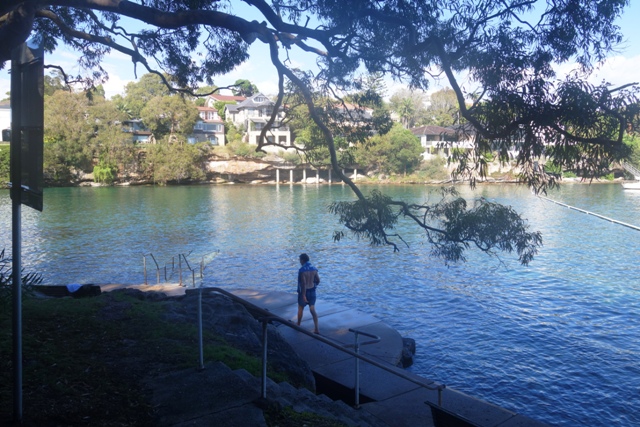 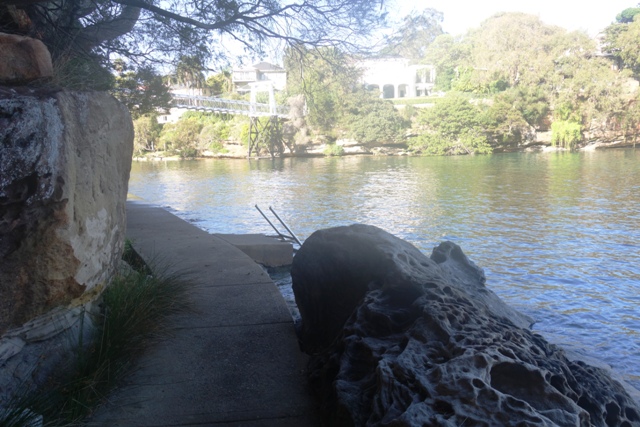 I scan the spot but there’s nothing there. “Must have slithered off,” says the blue trunks man as he overarms out to the middle of the bay and floats on his back. 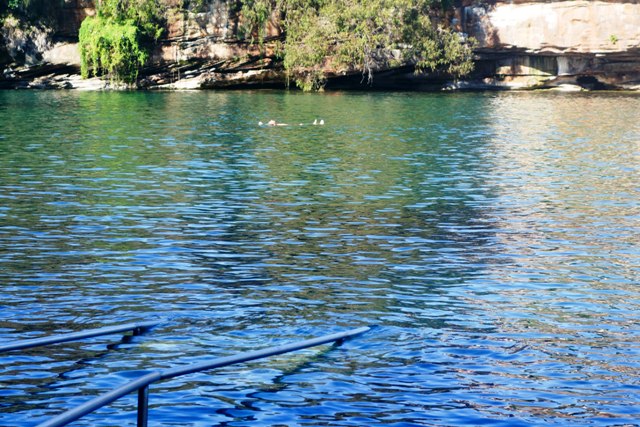 And then he swims over to a ladder and tells me his name is Max, 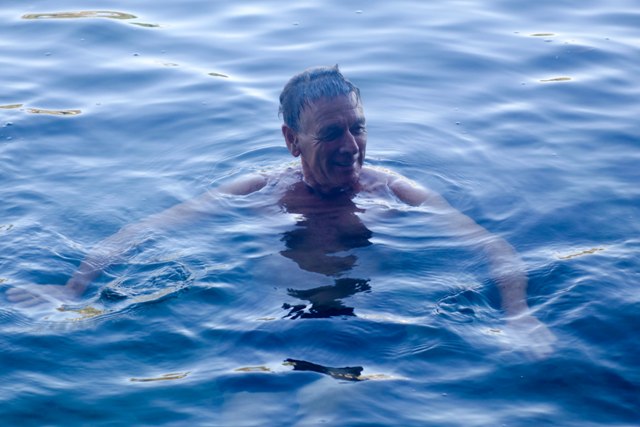 “What do you like about the Parsley Bay Swimming Enclosure,” I ask Max.

“It’s my pool and I love the bushland setting and the ancient sandstone.” 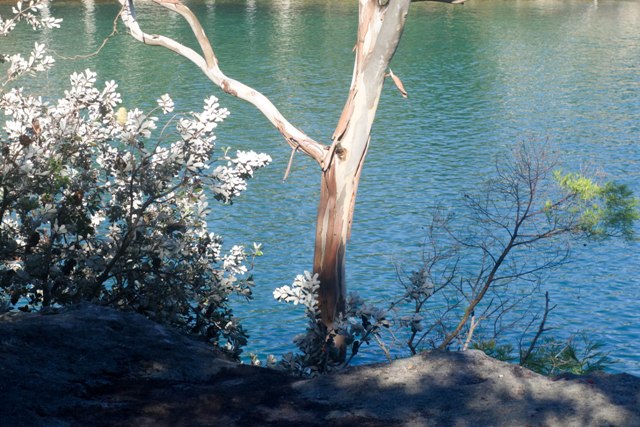 When he gets out he tells me he’s a landscape artist and he likes to paint Parsley Bay, the land of the Birrabirragal people before white man came. 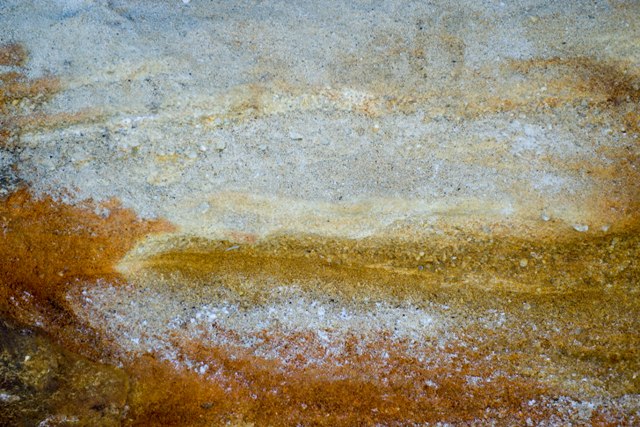 We talk about William Wentworth, whose family acquired the land in 1827 and how for the next 80 years it remained in their private ownership as part of their Vaucluse estate. 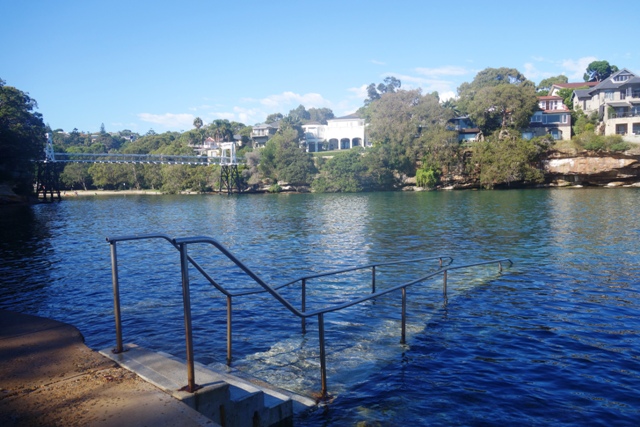 As we sit on a bench and admire the 109-year-old bridge, swimmers wade in to the bay that no one is quite sure how it got its name. 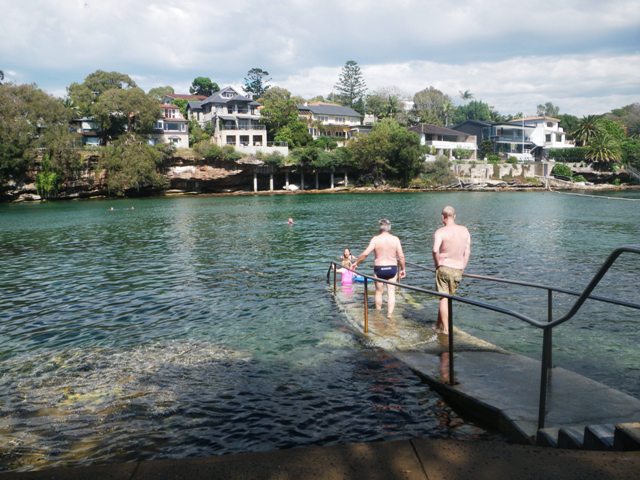 Some say it was after an edible plant similar to parsley that the early colonists found in the area and First Fleeters ate to ward off scurvy. Others contend it’s named after a hermit called Parsley who lived in one of the caves above the bay. 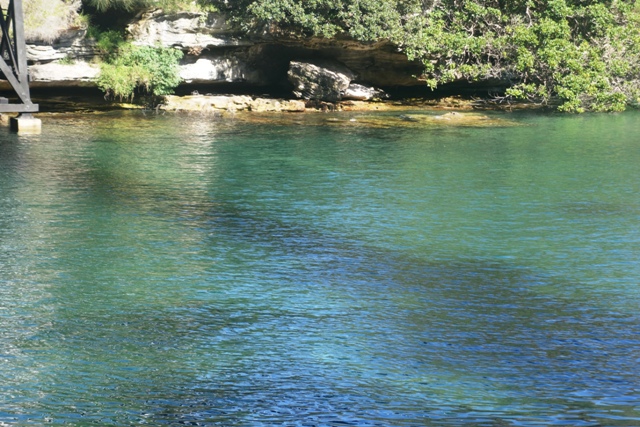 No one is quite sure but one thing we do know is that if a chap called William Notting and his Harbour Foreshores Vigilance Committee hadn’t lobbied the State Government from the early 20th century to secure public access to waterfront areas like Parsley Bay only a few privileged locals would be swimming here today. 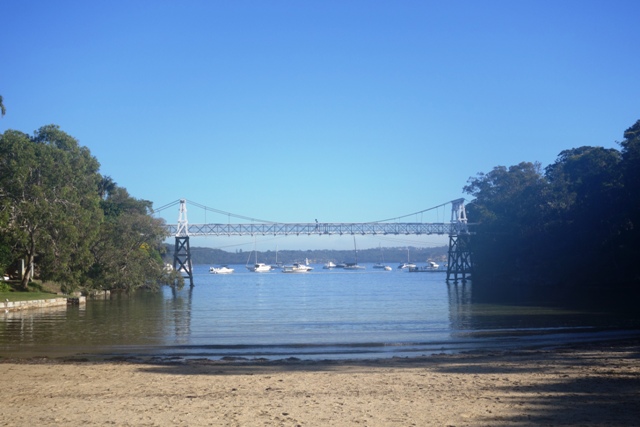 But back to Max and my water-side chat which covered many subjects from painting to writing, his love of the hinterland of Byron Bay and his move from England to Australia nearly 40 years ago to make a documentary film. 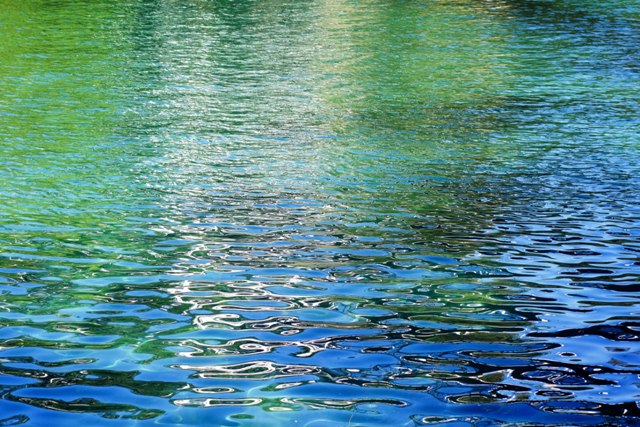 As he tells me he’d like to start a campaign called ‘pick-the-rubbish-up’ so that places like Parsley Bay remain pristine, kayakers paddle into the bay and two women in sun visors, like my mother wore on the tennis court, breaststroke back and forth. 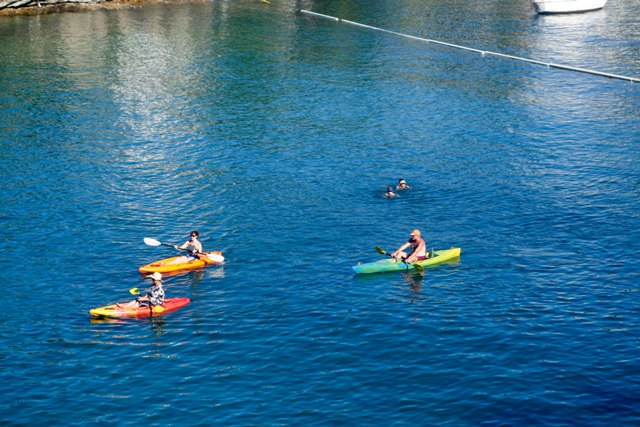 Others swim by the boom and shark netting that’s removed each winter for maintenance and lap the 95 metres across the bay. 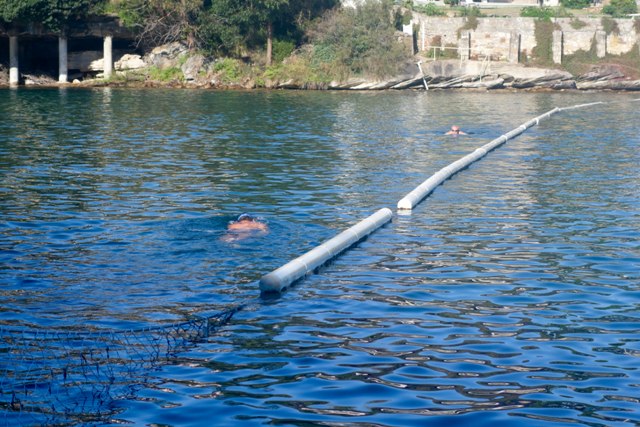 When Max decides it’s time to head home I follow the sun visor ladies into the high tide water. 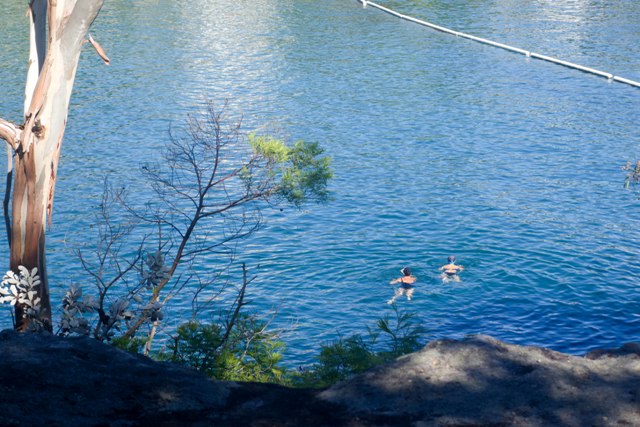 I push under to check there’s no holes in the shark net first installed in 1931 and then swim across to the sandstone rocks on the other side of the bay. 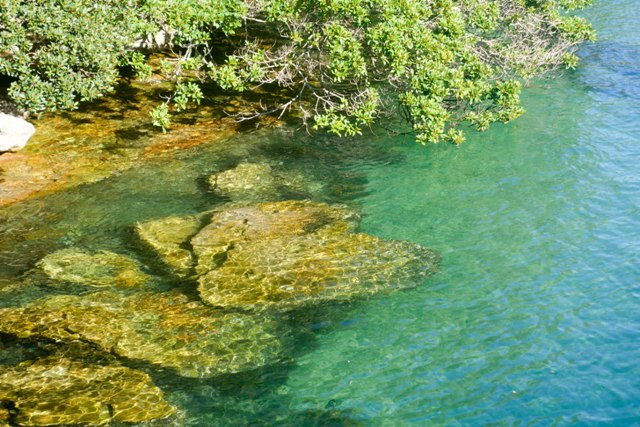 Silver fish dart past and when I get out a man about to cast his line tells me it’s probably bream; another says this is the best place in Sydney to swim. 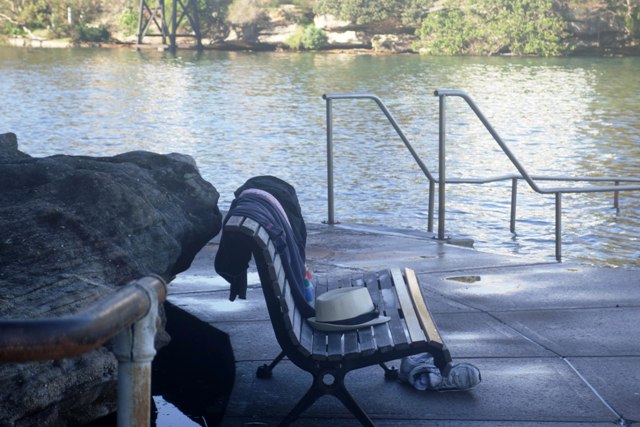 As I walk back along the path where Max spotted the huge eastern water dragon, baby ones scamper over the sandstone and into the bush. 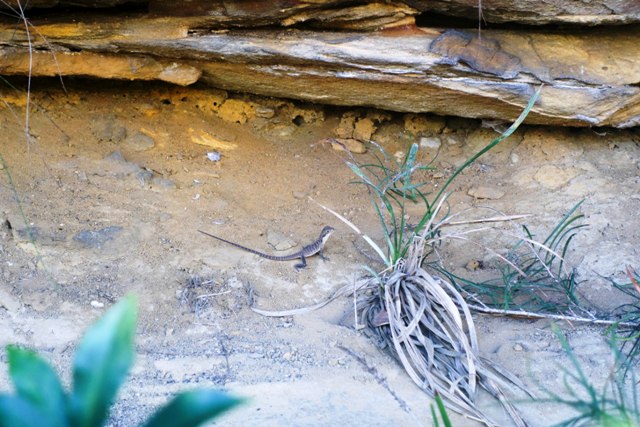 On the beach, mothers and toddlers paddle in the shallow water and a couple lie on deck chairs in the park. 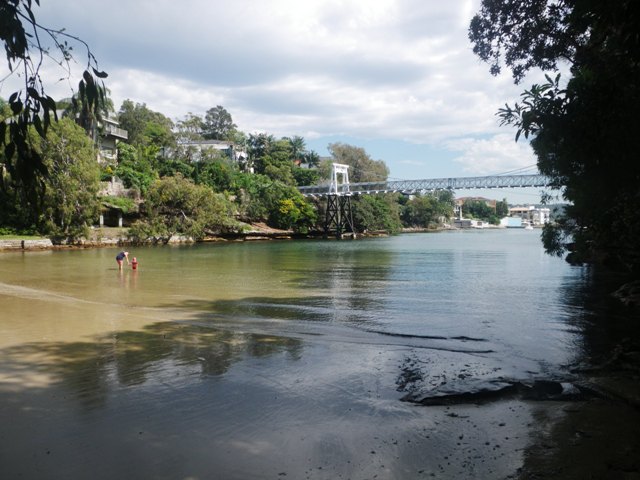 I look back towards the deep end and feel grateful for William Notting and his Harbour Foreshore Vigilance Committee for ensuring everyone can enjoy little pieces of paradise like Parsley Bay. 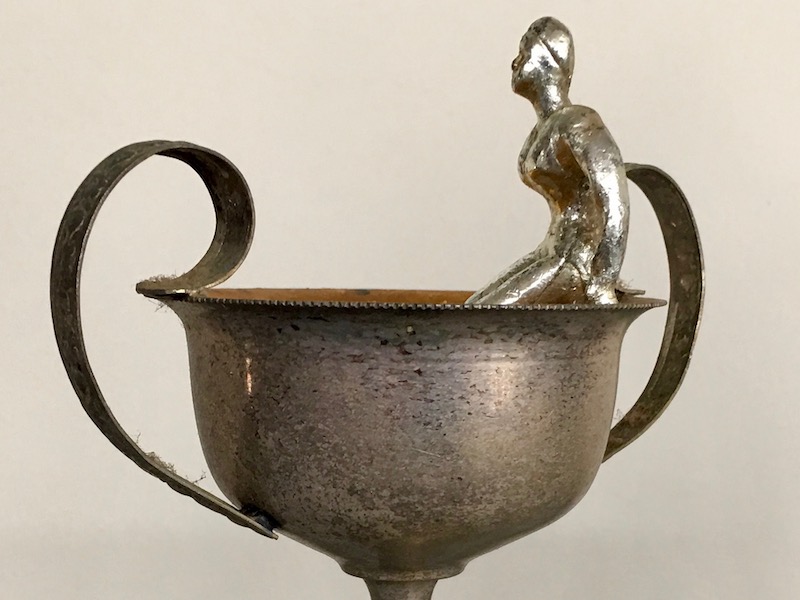